Further to this item in our latest Newsletter dated 21 June 2020, I have an apology to make.

It has been discovered that, due to a misunderstanding, it is not possible for the Don Gorge Community Group to organise a litter pick on Friday 26 June as CRT are not carrying out any volunteering activities for groups at this time and it is considered that the organisation of such an event by us would be too onerous in terms of supervision and the provision of santised equipment and personal gloves, etc.

So, to clarify: CRT’s challenge is that individuals or families should consider picking up items of plastic as they take their daily walks along river or canal banks.  In this way, families would be responsible for observing acceptable social distancing and each group would be responsible for their own equipment necessary to avoid the transition of Covid 19,   Staying within the guidelines set out by the government is essential at this present time.

I am attaching below the link to CRT’s Challenge so that if anyone would like to register for the scheme they may do so.  It is obviously not necessary to register, but would show a level of commitment and support for the Challenge.

https://canalrivertrust.org.uk/news-and-views/features/plastic-and-litter-in-our-canals
Apologies again for the previous misinformation.
Posted by Liz Reeve at 12:30 No comments: 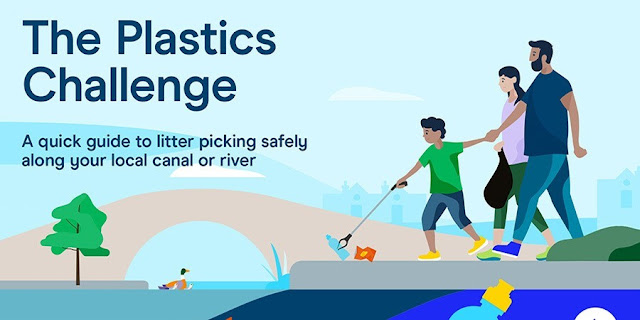 Get active to fight plastic
Every year an estimated 14 million pieces of plastic end up in and around our canals and rivers. Why not join the Canal & Rivers Trust’s  Plastics Challenge?

It is a bit last minute, but now that restrictions are being relaxed, we have decided to pick up this challenge by doing a litter pick this Friday 26 June, meeting at the container by the lock at 9.30 am, though I feel sure someone will be near the car park on Nursery Lane to distribute sacks and litter picking equipment for anyone who turns up.

The CRT’s interest is particularly in relation to canals and rivers, so I expect it will concentrate on the Trans-Pennine Trail, the Island and around the Fish Pass.  However, picking anywhere within the locality will be greatly appreciated.  The more helpers that turn up, the better, so tell all your friends.

Can you believe it’s the longest day today!  It seems only a short time since I wrote last February and yet so much has happened in the meantime, with the Coronavirus pandemic and the lockdown since the end of March.  On a personal level, it has been horrendous, with break-ins, thefts and further damage being caused to our home and those of other residents at Lower Sprotborough, so that we now worry about starting any renovation due to the possibility of further criminal activity.

None of that, however, has had any impact on the popularity of the Gorge as visitors have flooded in (no pun intended) on a daily basis since before the lockdown, regardless of social distancing, and the parking has been worse than ever, not helped by the Boat Inn car park being unavailable.  On several occasions cars have been parked all the way up Nursery Lane and on double yellow lines from the car park to the Boat Inn entrance, including inconsiderate parking across the access to the lane to the woods, so that residents have been unable to get in or out.  It is also unacceptable for cars to park in front of the gate to the river bank when the turning space may be required for the farmer and delivery or workers’ vehicles involved in the cottage renovations.

DGCG AGM
This was held in March and we welcomed Ian Carpenter as our new Chairman.  I feel sure he is going to prove to be an excellent choice and will lead us on to better things.  Cllr Alan Bennett, representing Warmsworth Parish Council, was elected Treasurer and other committee members are Cllr Cynthia Ransome, representing S&C Parish Council, Steve Swift and Paul Allot of Sprotbrough and  Mark Whittaker of Warmsworth.

Free Trees
Just to update you on this.  The trees were planted and it is hoped they are now growing well, though I must admit I personally haven’t been able to go and check.

Co-op Community Fund
This fund is progressing very nicely and we have already received nearly £3000 from donations from Co-op members, so a big thank you goes out to all those lovely people who have chosen our group as their designated charity this year.  The final grant will come in October, so there is still time for anyone who shops at the Co-op to become a member and choose us.  There are shops at Askern, Cantley, Doncaster and Edlington, including funeral parlours.

“Sprotbrough Oral History: From Rural Estate to Real Estate”
Unfortunately we had to cancel meetings during the lockdown, but the ‘home-time’ has given me space to make good progress with the book and I am now just waiting for the last three contributors to send in their final amendments.  I am also hoping that we will all soon be able to meet again for a group photograph for the book, which has been impossible so far.  It will then go out to a few ‘readers’ for checking before going to the printers.  I am now hoping it will be out around the end of July.