6.00 pm  The river seems to be going down again at present, so hope things will soon be back to normal.

Got up this morning to the news that Mick had been up since the early hours, warning canal boat owners that they were likely to find themselves settled on the island if they didn't move soon.  In fact one of them couldn't move and the owner was left high and dry with the fire service and police in attendance.  They were eventually left to their own devices with the expectation that someone would come to see that their immediate needs were met (in fact the Red Cross did arrive later), but after standing around in the cold for some hours, we took them in and gave them coffee to warm them up.  I later took them home to Rotherham as there was nothing to be done until the water goes down.  Hopefully their boat will float off as the water recedes.

In the meantime, we have had to have water pumped out of the lane again (big thank yous to the Environment Agency) so we are left with a muddy mess once more.  Not to worry, at least we are still warm and dry which is more than can be said for some others around the country.

DANGER ON THE RIVER BANK

Further to my post under this heading, I would like to warn cyclists in particular about the work that has just been done on this. 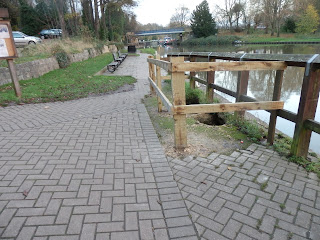 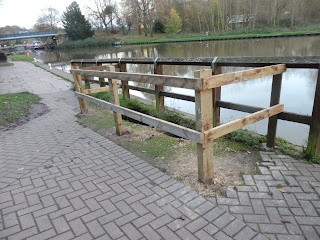 ﻿No, the hole hasn't been filled in.  Somebody has put a fence up, which would be ok as a temporary measure except that there's no warning and, if you happen to be riding along and the light's not so good, you might ride right into it and cause yourself some damage.  There isn't even a reflector light on it which might at least give you a sporting chance.