The Well at Lower Sprotborough

CONGRATULATIONS TO OUR CONSERVATION VOLUNTEERS 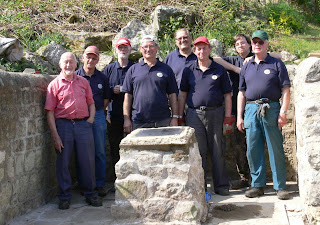 Our Conservation Volunteers have continued to meet on a fortnightly basis doing all kinds of things to make the area more attractive, but towards the end of last year they began a new project.  On the lane leading to Sprotbrough Flash and the woodland, there was a well with a pump which was used by the residents of Lower Sprotbrough until the 1920s.  Since then, the site had become overgrown.  It had been uncovered and investigated at various times over the years, but gradually it had become covered over once more.  The volunteers decided to take it on as a project and so set about clearing it out again with the intention of sealing the well, which was beautifully lined with bricks, and building a cairn.  Unfortunately, having started, the winter’s snow and ice put a stop to it until the spring, but eventually on 19th April a time capsule was sealed inside and the topping out ceremony was performed.   The cairn was topped with a stainless steel engraving of the photograph of it featured in Peter Tuffrey’s book “Sprotborough, Cadeby, Cusworth and Levitt Hagg”.  By July, planters had been made and filled with flowers to bring the project to an end.
With the aim of honouring the volunteers’ commitment to the project and perhaps to gain a little publicity, we 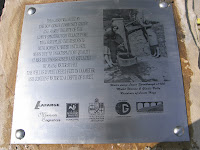 decided to enter it into the Community section of the Doncaster in Bloom competition.  The award ceremony was held on the 12th October at the Mansion House and we attended with little hope of success as the judging took place only a few days after the flowers were planted and they really needed time to develop.  However, we enjoyed seeing all the other entries displayed on the screen and thought the photo of our cairn didn’t look totally out of place amongst them, so crossed our fingers and waited.
Imagine our delight then when we heard the Don Gorge Conservation Volunteers Well Project named as the outright winner.  Ken Green, one of the volunteers who had done a great deal towards the fulfilment of the project went forward to receive a certificate, vouchers for £20, an engraved trophy and a smaller one which we will keep after the larger one has been returned.
It’s very satisfying for the volunteers to have their work recognised in this way as they work so hard throughout the year and we congratulate them on this very special achievement.
Why not come down and have a look at it. 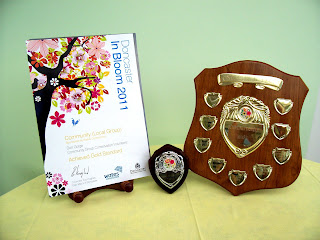