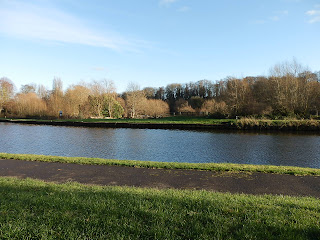 FISH PASS & SMALL HYDRO SCHEME AT LOWER SPROTBOROUGH
CHANGES PROPOSED TO THE ORIGINAL SCHEME, WHICH WAS PLANNED TO BE ON THE LEVITT HAGG SIDE OF THE RIVER
This is the proposed new site on the island for the fish pass and small hydro scheme, along with the housing required for the electrical control unit.  This area is quite narrow and is currently used as a picnic area.

We have been made aware that the Canal and River Trust (ex British Waterways) and the Small Hydro Company, which are in partnership, have agreed that siting this scheme on the south side of Sprotborough Falls is not now viable and so they intend to build it on the  north side, ie on the island.

This has come as a complete shock to those of us who have been involved in the planning so far and we wish as many people who might have a view to consider the implications of this and contact us.  We had always had concerns regarding the siting of the housing required for the electrical control unit, etc, but were waiting for the planning application before considering objections.  However, although plans have still not been published, there seem to be many disadvantages to this proposal as follows:


·      This is considered to be an area of outstanding natural beauty and the island is a Site of Special Interest (SSI).   We believe that anything which might undermine the fragility of the island should only be undertaken after stringent assessment and consideration of all the possibilities.
·      Lower Sprotborough has been one of  Doncaster’s most attractive beauty spots for hundreds of years, one could even say the jewel in Doncaster’s crown, and as such should not be marred by large building/s which are out of character with the area..
·      Potential environmental damage to trees and habitat.
·      Access of all plant and machinery would be via Sprotbrough village, down Boat Lane and over the canal bridge for a period of approximately six months.  This would involve plant crossing the high pressure gas main supply to the village.
·      Disruption of traffic flows over the river during construction and also during cable-laying activity following construction, with the likely use of traffic lights for weeks or months at a time.
·      Potential weakening of the canal bridge.  This is protected at present due to the weight restrictions already in place on the river bridge.
·      The wall at each side of the gateway access onto the island would be in jeopardy due to the present width of the gateway and the anticipated size of plant and machinery.
·      Water flow rates are greater on the island side.  Would this defeat the object of enabling fish to ‘climb’ the ladder?
·      Weakening of the canal embankment due to heavy plant driving on and off and destruction of the surrounding area during construction.
·      The possibility of increased flooding.   The island has been so landscaped that, when in full spate, the water will flow from the canal to the river over the island.   If it should flood during construction, there could be a danger that parts of the island would be eroded and washed away, particularly as the proposed site is on a narrow section of the island.  Could such damage actually split the island in two making access to the end of the island impossible?
·      Because of the fragility of the island, it seems possible that this erosion could be increased, not only during construction, but in the longer term as soil disturbance might have unforeseen consequences in future.
·      If there is any change to the way in which rising waters are allowed to flow over the island - or, indeed, if debris in the filter beds causes backing up of flood waters, it is possible that The Boat Inn and the cottages at Lower Sprotborough could be more endangered than is the case at present.  As we know, the 2007 inundation resulted in flooding of them by more than a metre of water.
·      One would expect that a geological survey has been carried out by the Small Hydro Company to ascertain the possibility of this risk.  If so, the results should be published.  If not, why not?
·      The installation of two buildings, one approx 12' square and 8' high - and even higher if it has to be raised up to take account of flooding.  Even with environmentally-friendly cladding, the size and height of these would destroy the natural beauty of the area.
·      Access to any viewing area (which was part of the original scheme) would only be available from the gate between the two bridges, which would be dangerous for pedestrians as there is no footpath on western side of the road.
·      The possible loss of use of the island for picnickers and anglers during construction and into the future.
·       Potential for loss of moorings for narrow boat users during construction and into the future.
·       Negative visual impact of debris being held back on filter grids required to protect plant.
·       Impact on environment and local residents from construction noise and activity.
·       Noise from generator equipment, etc, has been an issue on some sites where hydro-electric has been installed.  This will need to be taken into consideration because of its proximity to residents and the possible impact on visitors to the area who currently come because of the peace and tranquility the area offers.
·      The desecration of this beautiful area would be a tragedy and any organisation or profit-making company which claims to improve the environment by destroying it should be prevented from doing so. 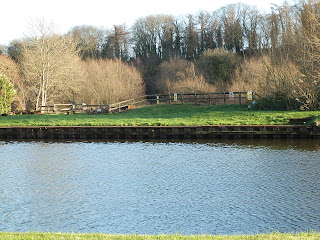 .
Just over the fence is Sprotborough Weir.


WATCH THIS SPACE FOR FURTHER INFORMATION AND CONTACT US IF YOU HAVE ANY COMMENTS YOU MAY WISH TO MAKE.  MANY THANKS. 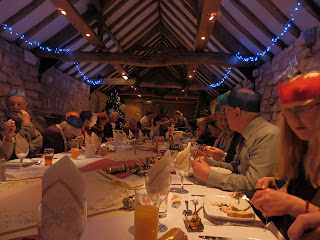 Held for the second year running at The Cadeby Inn, a good time was had by all.

Many thanks to Richard Aldridge for organising the event again.
Posted by Liz Reeve at 17:08 No comments: