As you will have seen from the notes of the AGM, it was brought to our notice that a lot of trees are being cut down in Sprotborough Plantation and concern was expressed that too much was being cleared.

Yorkshire Wildlife Trust have the contract to maintain the woodland at Sprotborough and, as a result of the question raised, an approach was made to explain the reasoning behind this clearance.  What follows is the reply and I hope this explanation will be sufficient to answer the questions raised.

"The woods at Sprotbrough Flash are very evenly aged (all tree are the same height and girth and a small number of species), which isn’t ideal for the variety of other things (plants, insects, birds) that live in the woods. Having areas with differently aged trees, enables an understory to develop (hazel, hawthorn etc. are good for this). Some bird species like areas that have been cleared within the last 5 years and some like woods that are 5-10 years old, etc.

As the areas we are clearing are a small proportion of the entire woods, the existing things have plently of space to remain, but hopefully we’ll encourage a few more species to nest on site.

As none of the YWT staff or vols are entomologists, then it’s harder to prove a difference in insect populations, but studies by others have shown that it is beneficial to insects.

We are sorry to report that Bernard Pearson who has been a stalwart of the Group, acting initially as Chairman before relinquishing that position more recently, has had to resign this year due to ill-health.  He will be greatly missed and we would like to acknowledge the time and effort he has put in to supporting the preservation of the Don Gorge, both as a conservation volunteer and as our representative on several partnerships, over many years.
Posted by Liz Reeve at 12:46 No comments: 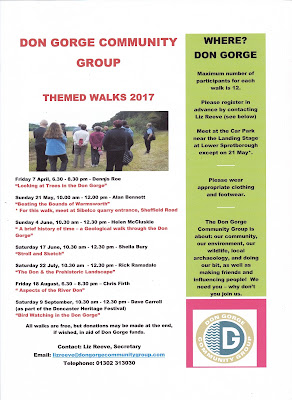 The AGM was attended by 13 people.

The Annual Report & Accounts were received and can be found on our website. However, the notes of the presentation by our very interesting speaker, Pat Hagan, Head of Service and Communities at Doncaster Council, are shown below.

The Election of Officers and Committee Members can also be found on our website.

These four also include sports and leisure facilities and interpretation and translation facilities, eg in relation to asylum issues.

Research had been done into what people want most out of the council and the issues that came up were what most people want:
Quiet, clean areas, reduction of crime and anti-social behaviour and good local services rather than centralised ones. Generally a nice place to live.

How do they achieve this:
10 neighbourhood with a team leader.    Sprotbrough and Mexborough have Glyn Smith in charge and 5 others.
All issues can be covered by special people allocated to them and this method seems to be effective.

Some Challenges:
• Mexborough – localised gang crime has been eliminated when 13 people were imprisoned.
• Edlington – anti-social behaviour was targeted and was damped down. These types of behaviour often flare up again and have to be focused on again.
• Rough sleepers/homelessness issues in the town centre can lead to anti-social behaviour. A problem before Christmas was solved through discussion to establish specific needs.

Questions:
• There are currently only 5 or 6 rough sleepers in town and approximately 500 beds covering a variety of needs available.
• A self-funding bureau is available for anyone needing an interpreter which covers about 27 languages.
• The Neighbourhood Response Team is still operative on a 24 hour basis to cover any problems which arise. Video recording and night-time patrolling also spots more general problems, eg street lamps which have gone out. It is linked to the police via Tel: 101 or Doncaster Council on Tel: 736000
• Litttering and fly-tipping are a big problem. Some covert surveillance methods or sorting through rubbish to identify where it has come from are used and can lead to prosecutions. 3500 fines have been given for littering and dog fouling. Gates have been erected to prevent access to lanes and dark areas where rubbish is known to be tipped. Food outlets, eg KFC and Macdonalds, are also targeted to reduce packaging to a minimum.
• At Cusworth park, litter is picked up on a nightly basis by a volunteer, but by next morning, it can be all over again from people parking and eating takeaways in the night.
• Although good work is done in the Don Gorge, there is room for enhancement and it would be nice to have new benches on the TPT which has just been tarmacced, some of which is already finding its way into the river in places due to misuse by fishermen climbing down the bank. Woodland is also being cut down by YWT which seems unreasonable. 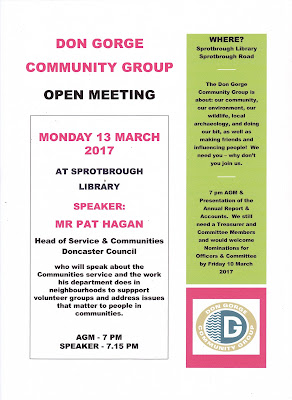 All are welcome to join us at this event to learn more about the work of the Group
Posted by Liz Reeve at 08:57 No comments: