Playing tag in the lane, a tin bath in front of the fire,  rambling through the woods; walking up the hill to chapel three times on Sunday and my granddad shouting ‘hallelujah’; Miss Goodman’s village shop and characters with names like Mr Spink, Mr Sharp and Mrs Meek; a bucket toilet in the back yard, helping on the farm; the smell of washing drying round the fire, dough rising on the hearth; grass verges and few footpaths, old houses, the river, the canal and ice skating on the lake; sledging down Hill 60, ice crystals on the window panes, wet gloves and hot aches; shelling peas and harvest festivals; cats and kittens being born – and sometimes drowned; the little school in the village and a friend hiding tough meat under cabbage so that she would be allowed to leave it; the last horse-drawn barge and lads diving from the bridge on hot days; my mum and Mrs Lockwood cleaning the chapel and my dad taking us to the races; people picking blackberries or carrying armfuls of bluebells down the wood, just to throw them away when they wilted; catching the bus to Richmond Hill School and mourning the death of King George in 1952 before moving into the new school next door; chickens and collecting eggs; old bikes and pram trolleys; chilblains and scorched legs caught by huddling too close to the fire whilst trying to avoid the draughts; passersby asking for a drink of water; tying people’s door knobs together on Mischievous Night, and bonfire night with rockets and Catherine Wheels, and jumping jacks chasing us down the lane; politicians sending cars to collect last-minute voters; and listening to the radio, a life-long pleasure that meant so much to everyone in the 40s and 50s: Listen with Mother, Children’s Hour and Journey into Space, Chapel in the Valley and Morning Service, Mrs Dale’s Diary and The Archers, Round the Horn and the Navy Lark as we ate our Sunday dinner, and the excitement of winning the Ashes from Australia in 1953 for the first time in 19 years
﻿
﻿

These random thoughts course through my mind as I think of ‘My Sprotborough’.  For the first ten years and ten months of my life, the images of Lower Sprotborough that these thoughts provoke were my reality: enjoyed and accepted unquestioningly by the child I then was.  I thought what they represented would go on and on and that I would continue to be part of it all.  To me it was idyllic and I wanted it to last for ever.
But on the 21st December 1954, my dad set off for Wales to see his brother on his BSA Bantam, never to be seen again.   The funeral was on Christmas Eve and what should have been a celebration turned into a wake.    The picture of my mother washing the hearth in floods of tears, as I stand by not knowing what to do or say, is the one that will stick in my mind for ever.
I just about scraped through the 11+ and became a Percy Piglet, transferring to the Grammar School the following September, feeling quite grown-up as I travelled to Sprotbrough Road end and then caught the Woodlands bus to Adwick – no special buses for the few of us who attended Percy Jackson’s at that time, though a pass was provided.
By the time my five years there had passed, it was 1960 and Sprotbrough had changed even more.  Anything ‘old’ became expendable and ‘new’ became enviable.  Sprotbrough was becoming a desirable place to live and that meant more houses were needed.  During the next decade, in fields where we had played and held Summer Fayres, housing estates sprang up, older properties in the village were pulled down, and, with the railway line now obsolete, bridges were demolished and the cut filled in.  A new road and footpath was driven through The Park and the celandines and primroses that had so beautifully dressed the verges in Spring were gradually forgotten.   Sprotbrough acquired a manicured air, more suitable for the increasing number of vehicles and safer for pedestrians.   Even the name of the village changed when, for some reason unknown to me, and to my intense displeasure, the Council decided to take the heart out of it by removing the middle ‘o’.
They say disappointment always accompanies the return to a well-remembered place, but although I had married, had a family and moved away, I had never truly left.  It was still home, as my mother continued to live at Lower Sprotborough.  We had seen the transformation being made and, whilst being nostalgic for some of the losses, being the new generation, we recognised the benefits too.    We resolved to return and hoped we might carry any disappointment lightly.
We have now been back for almost nine years and, despite the flood of 2007, have not been disappointed.  We enjoy the benefits of modern life just as much as anyone else – who would still want a bucket toilet in the back yard for instance?  Or no central heating?  And how we would complain if the roads were always full of pot-holes and there was nowhere safe to walk?
Fortunately, I have the best of both worlds, as little has changed at Lower Sprotborough where I live once again.  I rejoice that the lane, pot-holes and all, is still tarmac free and that nature is allowed more or less free rein.  The Flash, that was simply ‘the lake’ to us, still attracts interesting birds - and ‘twitchers’ to see them, the river bank and the woodlands still produce lovely wild flowers, and it is still possible to walk where no vehicles can impinge on one’s senses.   Sadly, there is no sound of children’s voices playing outside in the lane these days, but the bluebells are growing in greater numbers again and orchids flourish in the meadow.   The bars on the wall that we used to swing on at the end of the lane are sadly no more and badly parked cars mar the verges, but the fight is on to retain the natural beauty of the area.  As an old, new resident, I am committed to preventing the worst excesses that modernisation can throw at us and protecting what I can of the things that I loved so much as a child.  My Sprotborough is still ‘My Sprotborough’, but I hope that children who live here today and in the future might still be able to claim that description for themselves, having experienced something of the adventure that is still available to them in the countryside so near to their homes. 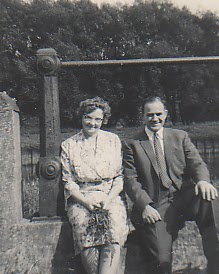 My mum, Alice Watson, and her second husband Norman sitting on the wall at the end of the lane at Lower Sprotborough, showing the bars, our gymnasium, on which we swung and learned acrobatics.
During the 1980s, Sprotbrough Lock was enlarged, Conisbrough lock was removed and the height of Sprotborough weir was raised to accommodate it.  These bars, which stretched the length of the wall, were removed and never replaced when the height of the wall was also raised.  Another reminder of childhood lost.
©  E Reeve
6 .11.11
Posted by Liz Reeve at 11:56